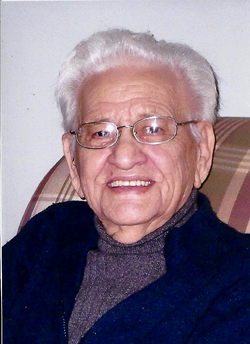 He was born on October 14, 1928 in Shamokin, the last child of the late Frank Carpentier and Mary Picarelli Carpentier. On June 7, 1966 he married the former Ethel Ess Landis, who survives him.

He graduated from St. Edward’s High School in Shamokin, class of 1946. He worked at Olmsted AFB where he met his wife and they were later transferred to Tinker AFB in Oklahoma. He retired, going back home to Middletown in 1979. Gerald’s life revolved around his family and he especially enjoyed his grandchildren and great-grandchild. He also enjoyed cooking, golfing, woodworking, playing cards, socializing and bowling. He was a member of Seven Sorrows of the Blessed Virgin Mary Catholic Church, Middletown.

He was preceded in death by 10 brothers and sisters.

In addition to his wife, Gerald is survived by three daughters and sons-in-law, Catherine and John Dorko of Sunbury, Linda and Paul Doup of Middletown, and Donna and Leroy Killian of Middletown; four grandchildren Stephanie and husband Kenneth Seigh, Stephen Moyer and wife Joyce, Jennifer Masters and husband Christian, and Kristin K. Doup; seven great-grandchildren Jonathan, Collin and Jacqueline McNeill, Sarah and Alexis Moyer, and Carson and Griffin Masters; one great-great-grandchild Madalyn Mease; nieces and nephews Maryann and husband Lou Lucchetti and children, Joseph Carpentier and wife Donna and children, Judith and husband Joseph Brokus and children, and Adriana and Christopher.

Inurnment will be at the convenience of the family in All Saints Cemetery, Elysburg.

Visitation will be from 11 a.m. until time of service on Monday at the funeral home.